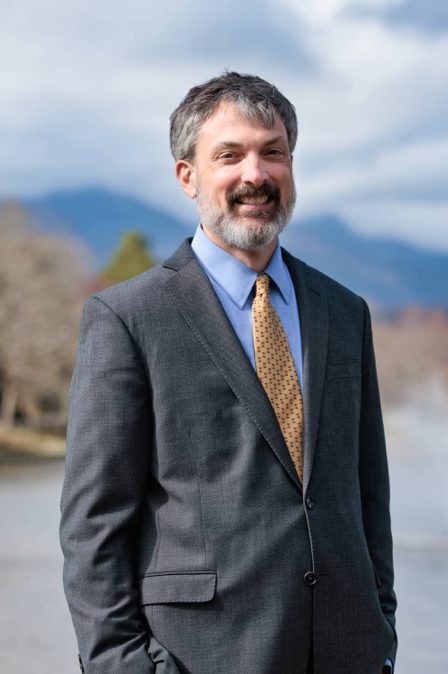 James arrived in the Black Mountain area to attend Warren Wilson College.  After graduation with honors in 1992 with a Bachelor of Arts in Economics and Business Administration, James enjoyed a one-year break from school while working in the area. In the fall of 1993, James entered law school at the University of South Carolina. Following graduation with honors from U.S.C., James began his legal career in Black Mountain in September of 1996 and joined Stone and Christy in October of 2001. James began serving as Buncombe County Public Administrator for estate matters in 2014, which cases form part of his caseload at the firm. In 2018, James began his second term as Public Administrator.

Outside of work, James enjoys spending time with family, wife Betsy Ellis and three boys, remodeling and construction projects, woodworking, hiking, mountain biking and motorcycle riding. Staying involved with the community is a priority as well, volunteering with the Mountain Area Volunteer Lawyer Network and serving on the Pisgah Legal Services attorney hotline since 1997 providing pro bono legal services to low-income residents of Western North Carolina.  James chaired the Pro Bono Committee of the 28th Judicial District Bar from 2006 to 2011. James was appointed to the Executive Committee of the 28th Judicial District in 2006, served as President of the 28th Judicial District Bar for 2013-2014, and finished his time on the board in 2015. In 2011, James joined the Pisgah Legal Services Board of Directors and in 2012, joined the Board’s Executive Committee and served until the expiration of his second term at the end of 2016.